"ic! berlin brillen (glasses) gmbh (inc.)," pronounced "eye-see-Berlin" was founded on the 1st of february in 1999. ralph anderl, harald gottschling, philipp haffmans, corinna harfouch and peter lohmeyer all became notarized business partners. our glasses, however, with their well-known screwless hinge system, existed even prior to this date. a first series was produced in 1996 by the "hga gesellschaft" (hga company). this series was offered for sale to the public in the "design-transfer gallery" (berlin) during a launch party. a single model was then decided on for production. this was the model "jack". visitors at the event were able to purchase vouchers, which they then could exchange for a pair of glasses after three months time. thirty-two courageous people went for it. at the same time, nine famous actors and actresses were written with the plea that they create some advertisement for the sheet-metal glasses. sure enough, corinna harfouch and peter lohmeyer decided to join up. they wore (and still wear) the glasses in films, talk shows, and in the shining sun. furthermore, they were so charmed by our "living-room company" that they also decided to take us by the hand financially. and as a matter of fact, in the spring of 1998, in berlin's "club der visionäre", the first sheet-metal-sun-glasses party was thrown. the occasion: the handing out of the first glasses in exchange for vouchers from the launch party.

peter lohmeyer slipped into the role of an intern, and handed out the glasses with style. corinna harfouch was accompanied by her mother, so that she would not be able to dance with the wrong men... "they lost their innocence in cologne" randolf rodenstock is supposed to have said about ic! berlin. what he meant is that, in cologne, we had our very first trade-fair. that was in 1997. situated with our tiny little stand, hidden behind some gigantic eyewear company, our humble point of departure was practically invisible. that, however, did not stop the truffle hunters of the industry from sniffing us out. suddenly, alain mikli, robert la roche and mr. lindberg were standing in front of us and congratulating us on the good work. 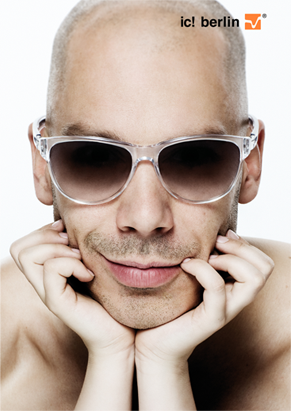 the first orders from the usa, japan, and europe were put down on paper. the press printed a bunch of pictures in fitting with the event. it was all like a dream. unbelievable.

the first international fair happened in 1998, in milan, at the mido. because we a) did not get a stand and b) could not afford a stand if we had gotten one and c) were way too late for the whole thing anyways, so we decided to sell the glasses from out of our jacket pockets. the convention's organizers took note of the illegal sales procedure and threatened to throw us out of italy. we then successfully managed to gain asylum with robert la roche. from there on out and we presented our glasses on his sofa.

in paris, in october 1998, "ic! berlin" was officially accepted into the designer-glasses-firm circle. that happened with the bestowment of the "golden silmo," which in professional lingo is lovingly referred to as the "glasses-oscar". with this golden key to the city, we were easily able to secure booths in milan, paris, and tokyo. the company grew and grew. with the founding of the "ic! berlin brillen gmbh," a further landmark was set in the direction of creating a "real company." there were suddenly real employees, and the amount of orders rose slowly, but steadily. more and more glasses were born into the ic!-family. in a kind of self-reproduction, the father model, "jack" gave birth to sons and daughters. names like "peggy," "juri," "max" and "phil p." were on everybody's lips. in addition, the delivery time was threatening to shrink dramatically. the first customers reacted with shock as they received their orders after only half-a-year. in the beginning, eight months were more the rule.

the last thing which one could possibly wish for, especially as one stands at the alter whispering "i do" into their loved one's ear, finally happened in the year 2003: the clash between the founding partners, haffmans, gottschling, and anderl began. after a period of conflict, which, among other things, created about 133 new grey hairs on the heads of the other employees and partners, haffmans and gottschling left the firm in the late summer of 2003. since that time, ralph anderl has been leading the firm alone as acting partner. officially, he carries the honorable title, "sheet-metal-glasses-salesman." 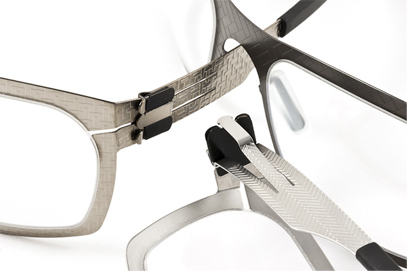 in retrospective reflection of its founding phases, the company has opened itself to new ideas, which may not have otherwise been able to find an open ear in the world of industrial professionalism. this is true for eyewear design, technical design, and also for other products which may be of interest. in this context, the travel guide-book, "Übersehene Sehenswürdigkeiten. Deutsche Orte" or "overlooked sights. german places." by michaela vieser and reto wettach was brought out onto the market in september 2004. enlightened ic! berlin opticians will act as distribution channels, as will various book dealers, who might not be blind to new sights. furthermore ic! berlin has published its first audio book in autumn 2005: "corinna harfouch spricht martin auer" its a real pleasure for young and old...

the move into the backfabrik in may of 2004 has opened new perspectives. for the first time, all departments have been unified into the same building complex. production, warehouse, distribution, accounting, and design - every department now finds itself in the same little neighbourhood.

every department? not quite. like always, our showroom, including pr and marketing, can be found in the good old max-beer-strasse 17.

it all began with hand cut aluminium glasses. in these frames, the basic idea behind the hinge could already be seen, even if they were fragile and sensitive. the fastening-clip on the hinge had not yet been developed, and the lenses were popped into the frame with a combination of pressure and dexterity.

at the trade-fair "euroblech" in hannover, we discovered a laser-sheet-metal-cutter, which provided us with the first cutouts from rust-free stainless steel - the basis for our first attempts at remodeling. the material held out, and the hinge sprung into action with a never before seen liveliness. the frames were still without a fastening-clip. the objections which came from opticians, such as, "you have to be able to open up the frame, if that is supposed to be a serious pair of glasses," were taken seriously by us, and we tried to find solutions. seek, and you will find: a slit right through the side of the hinge, the "cheek," and a clasp to fit around it, which held both sides together. the frames were now able to be taken apart and put safely back together. 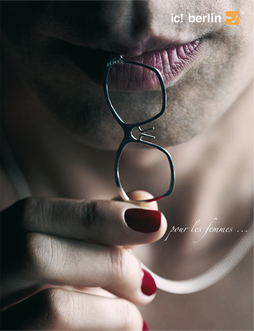 another important development was the s-schlag. while the hinge was separated by a straight cut, the s-wave created protection against twisting or misalignment of the two halves of the joint. this s- schlag was later developed into the ic! berlin logo. it must be emphasized, that all ic! berlin glasses up until this point had been created with the same 10mm wide temple pieces. all frames were offered as sunglasses, with the possibility of being used as corrective glasses as well. the so-called prescription glasses collection has existed since january of 2000. these frames have a modest 6mm wide temple - the hinge also underwent significant modification under the resizing process. a somewhat more complex clasp was developed to hold the cheeks together. from a design point of view, these glasses are a bit more modest. one might describe them as being conservative.

"ic! berlin is a design company whose goal it is to discover, develop, and market new and innovative ideas. this idea was basically formulated in the first catalogue, when the company was founded in 1997: ic! berlin is a platform."

the screwless ic! berlin sheet metal glasses were the first step, and they are at this time still the cornerstone of the company. "experiences which have been gained in working with the glasses will be carried forward to other projects in the future." the vision continues. museums, space stations, and the 25 hour day will follow...

the most conspicuous attributes of the eyeglasses collection are: 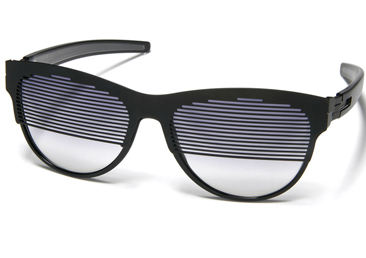 prescription and tinted lenses can be fit at will into the front frame piece without aid and can be very quickly exchanged. "the metal frame grabs into the grooved lenses." a clasp takes over the function of the hinge."the hinge joint and the glasses as a whole are grounded on the elasticity of the materials." the ends of the temples and the nosepads are covered with a silicon tube, ensuring a perfect fit.

the temple: starting in the 2006 spring/summer collection, our temples will have had a makeover! tapering of the metal on the back ends allows for an easy fit, in accordance with the taste and facial features of the customer: the temple piece can be easily varied from straight - to curved temple tips.

the temple tips I:

moulding for the spring/summer 2006 collection, the silicon tubes have been replaced by three dimensional moulded tips. they are moulded using thermoplastic synthetic material which is allergy-neutral, but not compatible with front pieces or temples from preceding models.

in contrast to the silicone tubes, the new temple tips and nose pads are designed to last the entire lifetime of the frames. should any appearance of wear and tear occur, we will be happy to deliver replacements free of charge.

as before: silicone tubes. the ic! berlin optician collection is divided into

2.) since mido 2005: the plastic! collection (a acetate-sheetmetal-combination).

the "sheet-metal" eyeglasses from ic! berlin embody the ideas and demands of the company: the glasses are simple and naked. "they are sexy because of the genius of the idea; the function." they are as unconventional as they are ordinary, high in quality, and in being so flexible, almost unbreakable, and light as a feather. 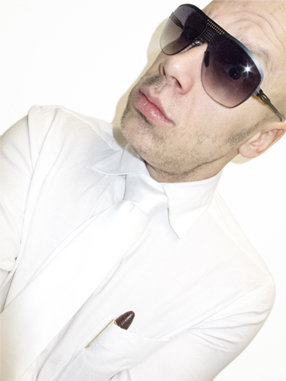 ic! berlin is a nitch company which like a david rebelled against the goliaths of the eyewear business. "it was born out of an ignorance of the potential of the glasses idea on the part of the eyeglass industry." professionals put the idea aside because it was "too different;" in hindsight, the same professionals have shown us that it had not been important to know anything at all about eye wear in order to have invented our glasses. unencumbered thought, an unimpeded view, and openness were essential to the development of the glasses, and to the founding of the company.

ic! berlin is not afraid of growing and increasing its market share."we know that this will change us and that we will have to leave romanticism behind," says ralph anderl. the executive director and cultural expert continues: on the one hand side, this means, for me and our employees, proceeding towards professionalism, introducing routines, and establishing hierarchies. at the same time it allows for co-workers to develop themselves, as well as ideas; producing and realizing them.

one of the main driving forces behind ic! berlin was, is, and will be in the future, the realization of ideas. from ideas, to develop tangible things, to modify and improve them, until a product which convinces the market comes to life. this movement is, among other things, in opposition to the lethargy, skepticism and sadness which in many ways, also in germany, and even in berlin, is to be found: to do something, and not to not do something, thereby learning how to do it; "to be open to suggestion, and not to lose sight of the idea." uncompromising and yet open to critique.

it is clear that at this time the main focus of the company is to market ic! berlin eye-wear. the demand on high quality in new products will be maintained, as will an openness for the new and unusual.

Watch a Video on how ic! berlin eyewear is made

Watch a Behind the Scenes Video with ic! berlin

Watch a "How to" ic! berlin Instructional Video

View a PDF of the ic! berlin Catalog